Mickey Mantle was the most popular player on the most popular team, and his baseball cards reflect that today. He backed up the fame with skill. From winning the Triple Crown in his best season of 1956 to appearing in twelve World Series (seven victories), Mantle batted .300 ten times, hit 526 home runs, and was the AL MVP three times.

The list goes on (great center fielder, best switch hitter of all time, crazy high OPS+, etc.), but what was most remembered about Mickey Mantle is best told by two traits. First, he is tied with Jim Thome for the most walk-off home runs at thirteen.

Second, Mantle had incredible power. He was known for his tape measure home runs. 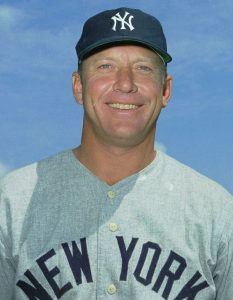 The term of tape measure home runs originated in 1953 game where Mantle hit the ball out of Griffith Stadium. The next day, the local newspaper ran a picture of Mantle with a tape measure.

Fans have always loved this type of player. The game is on the line, Mickey Mantle steps to the plate, and anything can happen. Simply put, Mantle was an exciting player with incredible skill to back it up.

Mickey Mantle baseball cards have represented that energy from their production into today. Mantle’s are the face of the hobby.

The man had charm. He said later on, “During my 18 years I came to bat almost 10,000 times. I struck out about 1,700 times and walked maybe 1,800 times. You figure a ballplayer will average about 500 at-bats a season. That means I played 7 years without ever hitting the ball.”

With Mickey Mantle cards as the face of the hobby, the 1952 Topps #311 is the most famous card in any collection. It is considered his rookie by the community, even though the 1951 Bowman set had featured Mickey Mantle.

The #311 was short printed by Topps because it was part of the last series in the 1952 Topps set. Topps also threw thousands upon thousands of the late series cards into the ocean. There are only 1,356 of these cards graded by PSA as of August 2019. There only 6 in Mint and 3 in Gem Mint. Most cards in higher grade were found in “The Find” in Massachusetts in the 1980s.

The only variation is the line surrounding the Yankee logo. On one variation, it is straight black, while the other has a partially filled line.

The 1951 Bowman Mickey Mantle is technically his rookie card. Some try to debate that this card is objectively more important than the 1952 Topps, but the 1951 Bowman is widely considered a far second which is unusual for obvious rookie cards. 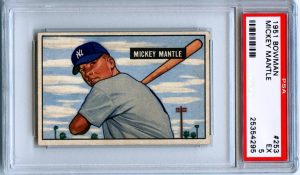 and it has the same rarity in higher numbers. However, a 1952 Topps Mickey Mantle sold for $2.8 million the same year at the same grade.

The card is praised as beautiful with the cloudy background of a young and ambitious Mantle. Mantle is shown in the number 6 which he wore early on in his career. The Willie Mays rookie joins Mantle on this set, making them the key.

There are numerous quality issues, including poor centering, print lines, and wax stains. As with the 1952 Topps, high grade cards are hard to find.

Topps had a killer design in 1953. The Mickey Mantle card at #82 shows this with the close up picture as Mantle coils with the stadium in the background. The red around his name jumps off the card.

A significant fact of interest is that Topps did not have another Mantle card until 1956. He signed with Bowman exclusively until Bowman was bought by Topps in 1956.

This card is also condition sensitive. Centering and chipping are the major concerns. The bottom of the card with the red border shows off any imperfection of the card. Thus, out of over 3,000 graded cards, there is only one registered as Gem Mint on the PSA’s website. A PSA 9 sold for $400,000 in July of 2019 at auction.

The facsimile autograph, hunched posture, and prominent Yankee’s logo and pinstripes make this an attractive card. Yet, it is completely overshadowed by the Topps of the same year. The disparity between the two cards from the same year is well known in the hobby.

As with the cards above, there condition issues with only a few PSA 10’s and 9’s registered. It has a much more accessible price range. While a PSA 9 sells for $50,000+, the price quickly drops. By the time it reaches a PSA 5, the cards sell for $2,500.  This is a great Mantle from his early years that won’t break the bank.

1952 Berk Ross is a 72 card set that is believed to have been released in New York because of the many Yankees, Mets, and Dodgers in the set. The cards came in 2 card planks that had to be separated to show them individually.

Since some consider the 1952 Topps Mickey Mantle a rookie card because it was Topps first major set, the 1952 Berk Ross falls into the RC category to many collectors because 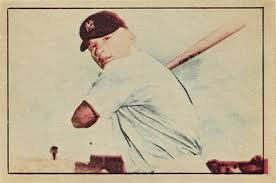 it was the inaugural set of Berk Ross as well. While Topps had the toe-in-the-water Blue and Red sets, this is the first attempt of Berk Ross, which increases the appeal.

Heightening the intrigue is the players’ contracts. It is assumed that Berk Ross produced these without the players’ permissions. Considering that Joe DiMaggio is off the releases of the 1952 Topps and 1952 Bowman, it is highly unlikely that he had given permission to Berk Ross.

Other teams had one or sometimes zero players on the set. There are some great cards with Jackie Robinson, Willie Mays, Ted Williams, and Joe DiMaggio, while Mantle leads the set once again.

The 1952 Berk Ross has higher condition sensitivity than the other cards. Out of 255 graded by PSA, zero are at a 9 or 10. This is another more affordable option with a PSA 8 costing less than $9,000. Plus, an investor could hold in hopes that the 1952 Berk Ross becomes accepted as an RC. There is a decent argument for it.

The 1969 Topps Mickey Mantle was chosen for this list primarily because it was his last season. Mantle is shown with a hard look in his eyes with years of experience under his belt. His early cards feature a bright smile.

A nice touch is that Mickey Mantle’s entire career stats are printed on the back.

Imagine the pressure that Mickey Mantle was under. He was signed a year after high school to the already legendary Yankees. As he rose through the farm system quickly, the massive New York media covered him as “the next” great Yankee.

When he joined the MLB, he was assigned to the #6 jersey. This was deliberate by the Yankees to symbolize the path of Babe Ruth at #3, Lou Gehrig at #4, and Joe DiMaggio at #5. Finally, Joe DiMaggio retired at the end of Mantle’s rookie season.

What makes Mickey Mantle so great is that he stepped up to the plate, figuratively and literally. He shouldered the enormous weight, pressure, and burden. Mickey Mantle did not just meet expectations; he excelled far and above.

His cards are a representation of that career with its charm, power, finesse, and consistency.