Soccer has been the global game for a century. The sport is wildly popular across the world without true competition from any other as the world’s game. Soccer trading cards are unique because of the worldwide appeal and the competition of other trading merchandise.

The most significant early cards were all produced in England. Given the worldwide appeal, producers began to formulate elsewhere, specifically in Argentina and Italy. With the exclusion of hockey cards in Canada, trading card production has largely found a

home in the United States.

Soccer trading cards live in a different market from the other major sports because many types of merchandise compete with soccer cards for the same buyers and sellers. Stickers, for example, have been sold by Panini since the 1970s, and they have been extremely popular. A completed album of stickers can sell for tens of thousands. The most popular of these stickers are produced during the World Cup by Panini, and eBay alone accounts for millions of dollars of stickers resold during the World Cup boom.

It is hard to judge exactly, but soccer trading cards are probably in second or third place to the trade of other trading items. This article focuses almost entirely on soccer cards, but it is impossible to talk about the hobby without mentioning the more popular and adjacent industry.

While soccer cards are not the most valuable sports cards, there is legitimate appeal from many different avenues. The popularity of soccer, the richness in historical value, and the many clubs, teams, and players across the globe create an exciting trading card hobby. When you consider how inexpensive soccer cards are from all eras, they are worth looking into.

Marcus & Company Tobacco produced the first soccer cards in 1896 outside of Manchester, England. The set was titled Footballers and Club Colours, and it contains 100 cards. The fronts of the cards have an illustration of a player with his name below, and the backs have an advertisement.

As with the tobacco era elsewhere, tobacco companies realized the potential of the sports cards for customer loyalty. Tobacco companies such as Kinner, Wills, Cadle, and Singleton & Cole quickly began producing their own cards. Producers began to experiment with photographs and colored illustrations. As the market became more and more crowded, innovations and failed experiments became common, and the variety has made soccer tobacco cards an interesting collection. 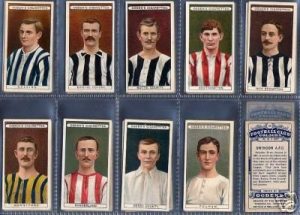 This 1907 set is a massive 595 cards. The key innovation here was the introduction of the oval shaped images.

Changes in the Market

Tobacco companies began to sell albums to collectors because cards were so popular. The London Cigarette Card Company was a store devoted to the sale and trade of soccer cards after opening in 1927. In 1933 the company launched “Cigarette Card News.” The paper rationing of World War II led to a quick end to the business, and it shrank the entire industry substantially.

The 50 card set from Ardath, titled Famous Footballers, showed a picture on the front, a tobacco advertisement on the back, and a short bio on the back. It is a good representation of the end of the tobacco era. Cards would change in post World War II.

Bubble gum cards in the UK followed the United States in the 1950s. A&BC Chewing Gum, founded in 1949 in North London, started to include soccer cards with bubble gum in 1954. The first set was the All Sports set which included 36 soccer players. Their first set devoted to soccer was in 1958 with 92 cards. They produced cards that were known for vibrant colors until 1974 when it closed down.

Panini was launched in 1961, and it began to compete with A&BC and Topps in the 1970s. At first, Panini produced Serie A soccer cards. The main avenue of competitions were cards designed to be glued into designated albums. These are referred to as figurines or more commonly as stickers. Like the cards, the stickers were sold in series to encourage collectors to buy, trade, and sell them in order to complete a set.

Panini became known for its World Cup albums which had players, teams, mascots, and 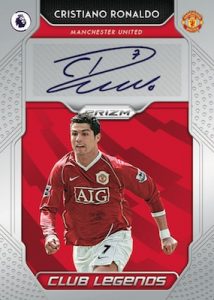 stadiums. The first set was released during the 1970 World Cup. A selling point was the use of English, French, and Spanish text to encourage global consumption. Panini quickly spread the stickers across the world. They began using self adhesives after the 1970 World Cup.

Thus, it is not an understatement to say that stickers have been, are, and will be serious competition to soccer cards. Additionally, marbles, cut outs, coins, and stamps are also popular within the soccer community.

Panini continues to have the license for the World Cup. For the 2019-2020 season, Panini will have exclusive rights to trading cards, stickers, trading card games, and the digital platform for the Premier League.

Argentina is the oldest home to soccer cards in South America. Cigarrillos Dolar, Cigarillos Plus Ultra, and Cigarrillos Monterrey produced tobacco cards for the Primera Division teams in the early 20th century. Many other companies have made cards, and vintage Argentinian cards are known for their circular shape.

Futera from the United Arab Emirates was established in 1989. It received some notable licenses from English clubs.

The most valuable cards in the soccer card hobby revolve around star players and autographs. They are not nearly as valuable as other sports.

Prices begin to go up by going back further. A Maradona or a Pele RC is a few hundred dollars, but the prices are mostly low for everybody else.

Prices go down significantly in the pre war era. Many of these cards from the sets mentioned above in the early twentieth century sell for $5 ungraded.

The most valuable collectible items are high condition sticker sets from the 1960s. Top sets can go for over $10,000.

Soccer cards have an unusual amount of competition from closely related items. The competition can drive down the prices of soccer cards.

One could conclude that soccer cards are never going to be at the top of their sport, so investment is unwise. Or, this could be viewed as a potentially intriguing market, especially when one considers the affordability of tobacco cards in soccer.

Whatever you choose to conclude, most people have little knowledge on soccer cards, and we hope that this article has been informative.