Football cards have a rich past as history, art, and entertainment. Despite the competition from baseball as America’s pastime, football has their own contention on the American mindset.

Football cards started in the late nineteenth century as football was being explored by the Ivy League universities. The cards were slow to develop during the pre war era, but into the 1950s they began to take off with an explosion in the late 1980s. The Met’s display showed this development, and it was well received. 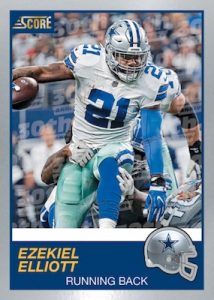 The exhibit was named “Gridiron Greats,” and it utilized the donation of a few hundred thousand cards from Jefferson Burdick, a retired electrician from Syracuse. 150 cards were on display, and they showed a rich history of football from the early days of the Ivy League into the modern NFL era. Though the argument does not win, the exhibit helps football to compete with baseball as the ultimate sport of America’s past.

While baseball has a stranglehold on some of the best vintage cards, football cards thrive in the modern era. In February of 2019, a Tom Brady Rookie BGS 9 with an autograph sold for $401,000 on eBay. A similar card would have expected to go for about $50,000 only five years ago, and it would have gone for $10,000 ten years ago.

Modern cards have some serious legs in football. Not only does this show the vitality of recent cards in football, but it also shows the growth of the market over the internet with such a massive sale on a public auction.

The history of football cards shares similar themes with baseball and basketball. Football cards have the rich past under the tobacco industry that baseball has. There was a similar lull to basketball in the decades surrounding WWII, as baseball cards began to take off. Then, earlier than basketball, the NFL began to soar and the cards followed along.

With artistic appeal, historical importance, and a promising investment future, football cards are worth looking into.

The earliest football cards come from Ivy League players. Football began to grow in popularity in the 1880s, and the first set comes from Goodwin & Co which produced the Champions set in 1887.

The 50 card set featured prominent players from a variety of sports, and they were distributed with cigarettes. This was a common practice at the time, and tobacco cards are some of the earliest cards for any sport.

The sole football player was Henry Beecher of the Yale football team. A fun fact is that his great aunt was Harriet Beecher Stowe, author of the ultra famous “Uncle Tom’s Cabin.” He was known for scoring 66 touchdowns in three years of college football. Of note is the odd shape and size of the football which can be easily observed through the picture.

The major set from the earliest days is the 1894 Mayo set. Containing 35 cards of the best football players in the Ivy League, these cards are very rare. One oddity is that the card that is guessed to be john Dunlop of Harvard does not specify his name. It is the most valuable card in the set. While a Mint 9 is around $5,000-$10,000 for everybody else, a Dunlop is estimated to be valued at $100,000 in the same condition by PSA’s website.

The earliest professional cards for football came from multi sport sets. They would  /activities of the day.

A major multi sport set is the Spalding America Champions set from 1926. Albert Spalding sought to sell more sports goods, and Spalding became the first company to market products other than tobacco. The cards were released in an envelope with a ten cents off at Spalding. 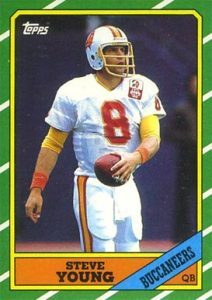 The cards measured at 1 1/2″ x 2 3/16” with 210 cards in the set. Featuring people from boxing, ballooning, and everything in between, the Spalding America Champions shows the photo, name, and sport of the athlete. The set has several basketball players, and some of them have cards with different backs that were blank or had ads. The backs add rarity to certain cards .

For the next few decades, many football players were included in multi sports sets. Another famous set was the 1933 Goudey Sports Kings. The set only had three football players, but they were the legendary Red Grange, Knute Rockne, and Jim Thorpe

The National Chicle Company created its own football set in 1935. The 36 card set features six Hall of Fame players. It features only football players (except for Notre Dame coach Knute Rockney), and it was the first to be distributed nationwide.

The Rockne and Bronmo Nagurski are the keys to the set. They sell for hundreds of thousands in mint condition. In terms of historical weight and not price, they are the equivalent of a Babe Ruth or Honus Wagner for the football community. The upcoming Second World War would lead to the rationing of paper. Sets would not return until 1948.

Following the paper rationing of the Second World War, Bowman and Leaf entered the football card industry in 1948. Both companies released about 100 cards of football players. Leaf distinguished itself for releasing the first post war cards in color, and they included many college players.

While Leaf exited after one more set in 1949, Bowman continued into 1955 when the company was bought by Topps. Meanwhile, Topps began producing sets in 1950. After sets featuring college players in 1950, 1951, and 1955, Topps resumed production of football cards in 1956 after taking over Bowman. Topps would be the major distributor until 1989.

Topps sets were noted for changing from year to year. For example, the 1956 Topps had a vertical design with a huge photo and colorful background. In one year, this was changed to two photos with a horizontal design. Ovals were used, colors changed, and the 1965 tall boys measured 2 1/2″ x 4 11/16”. Some speculate that Topps used the less popular football cards for a bit of experimentation.

The main competition to Topps came in the 1960s. Fleer made a brief dip in 1960 by making cards of the AFL. It quickly switched to the NFL, until Philadelphia gum grabbed the rights to the NFL in 1964. Topps was out of the loop for a few years, as they only had the rights to the AFL. After the AFL and NFL merged in 1966, Topps quickly regained dominance in 1968.

The cereal industry entered the market in 1962 with Post Cereal’s first set which was available by order or through their cereal boxes. Kellog followed in 1970, and they created sets until 1983. These cards were never a serious threat to Topps.

TCMA made waves in the entire industry for their philosophy behind the “Pure Card.” Released in 1981, the cards were inspired by the 1953 Bowman set. There was nothing special to them, as was intended, just a picture of a player without writing.

Into the Modern Era

Optigraphics began making other cards in 1985 under the brand Sportflics. They were known for creating lenticular motion cards, which means that the cards had an illusion of depth or motion when moved. They entered the baseball market under Score in 1988, and football cards followed in 1989. The Score cards were traditional, but they had better card stock, exciting photos, and better writing.

Upper Deck was right behind in 1991 with high quality cards for football, basketball, and hockey because of their successful 1989 baseball set. This made them the first company in a decade to be licensed by the four major leagues. Upper Deck quickly rivaled Topps.

A big part of Upper Deck’s success across industries was the use of inserts. They would put memorabilia used in games or autographs into the cards. Collectors ate them up. Inserts remain a major sell for sports today.

SkyBox International, Donruss, and Collector’s Edge also made football cards in the 1990s. These distributors began to fall out of the industry one by one as the values of new cards collapsed in the mid 90s. This was true for all sports cards. Eventually, Panini remained as the only licensed distributor by 2015.

Multiple football leagues have come and gone throughout the years. Today, there is the Alliance of American Football (AAF). These leagues often have their own collectible cards.

XFL came out in 2001. As it was known for questionably dressed cheerleaders, the cards are known for the cards of the aforementioned cheerleaders who were registered as the “Girls on Fire” in the 100 card set. 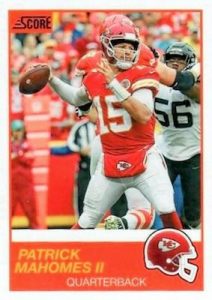 The World League of American Football was started by the NFL is 1991. It featured host cities from Europe and small American markets. Some major players, such as Kurt Warner, got their start here. Although it lost a reported 30 million per year on average, the league lasted until 2007, and there are numerous sets.

There are a few others, but the last to be mentioned will be the Arena Football League because it still exists today. Success has gone up and down, but today the AFL is struggling. Again, there are a few players who made it to the NFL, the most notable is Kurt Warner, and their cards can be quite valuable.

Overall, 99% of these cards are not worth much at all. Maybe a larger percentage. It is still worth mentioning in an article about football cards because the cards can be fun, different, and entertaining football card collectibles.

Starr Cards were the first to offer digital cards for the iPhone, iPad, and iPod Touch in 2011. Quickly after its debut, Starr Cards “Football Card Maker” made waves in the card collecting hobby.

Panini has made its own moves into the digital world. Gridiron, their app, was launched during Super Bowl 50. The app quickly rose to the number one position under sports on iTunes.

Digital cards seem to be working well. They are seeking to draw new and younger hobbyists. The goal is to recreate the hobby with trades, stores, and the excitement of a good find. Over half of the users on Gridiron have never opened a physical pack.

Football cards have their own unique path, but they share major commonalities with the rest of the sports card trading.

Football joins basketball as having growing success later on in the 20th century. This has produced more valuable, sought after, and traded cards in the modern era of trading. Like other sports cards, football has many valuable vintage cards. The whole industry shares the themes of the growth of the digital world.

With the growth of the digital world, football cards may be coming back to their roots. During the boom of the 80s and 90s, most children were priced out by packs costing hundreds of dollars. Collecting became serious business.

Today, we ask, “Why can’t it be both?” Children are always welcome in more affordable options, but the industry has grown into a serious investment for many. Of course it has, as many cards have steadily grown in value for decades.

The skies look clear ahead. Former NFL lineman, Super Bowl champion, and devoted investor, Evan Mathis is known for selling a 1952 Topps Mickey Mantle #311 for $2.88 million last year. He is the one who also flipped the Tom Brady rookie mentioned above in February of 2019 for $400,000. After the February sale, he told Forbes, “I love where the hobby is right now and where it’s headed.”

For investors and collectors of every age, the hobby is in a good place, and it looks to be getting better.