The first official basketball set was the 1948 Bowman. Until the 1986-87 Fleer, there are only a few noteworthy sets.

Though the sport was created in 1891, basketball did not begin to take off as a competitor to the NFL and MLB until the 1980s with the Showtime Lakers of Magic Johnson dueling Larry Bird’s Celtics.

In the 90s basketball began to boom with stars like Patrick Ewing, Charles Barkley, John Stockton, Hakeem Olajuwon, and above all else, Michael Jordan. 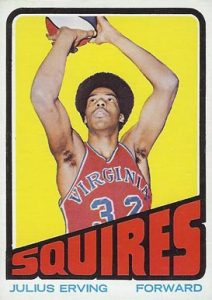 Basketball cards do not have the same rich history as baseball cards. For example, some of the best cards from basketball come from the 1980s and 1990s because production was restarted. There are only a few desirable sets prior to the 1986-87 Fleer, but for baseball, the opposite is true as the most valuable cards were produced prior to 1980.

640 million Chinese citizens watched the NBA in 2018. That’s twice the entire population of the United States. From the eastern Europeans with the Mavs including Kristaps Porzingis, Luka Doncic, and Dirk Nowitzki over to the Greek Freak, the 2019 MVP, competitive international players are drafted higher and higher.

Consider the following: PSA recently announced the opening of a headquarters in Japan. Rui Hachimura was taken 9th by the Washington Wizards in the 2019 draft, making him the first Japanese player to be drafted in the first round. Suddenly, there is major economy that has reasons to want his cards. Maybe this spills into the Wizards, rookies from his class, etc.

Essentially, as basketball spreads across the globe, as every NBA team is now valued at over one billion dollars, and as international talent continues to change the NBA, there is an argument that basketball cards will follow suit. Basketball cards have followed the sport in the past.

Cards of any sport have largely run in tandem with the game that the cards represent. When basketball was of tertiary importance at best and in financial trouble in the 50s, 60s, and 70s, not many cards were produced or were popular.

As the game grew into the following decades, multiple brands were produced, and cards soared in value. Previously ignored sets like the 1948 Bowman or 1962 Topps suddenly became important in light of a revitalized game.

The NBA’s growth shows exciting potential for basketball cards. It is an interesting time to research, buy, and learn a little more. Let us take you through the history of basketball cards by starting with the few pre-war sets.

The vintage earliest basketball cards were sets which included multiple sports. The 1910 College Athlete Felts B-33 had ten different sports represented with thirty basketball players. The packs were offered as a redemption premium for cigarette packs. Not much is known about these sets.

Two series of a variety of sports were released in 1911. The T6 College Series was a massive measurement of 6” x 8,” and it joined the more regularly sized T51 College Series. One card from the T6 was basketball, and five basketball players were in the T51. Collectors received a coupon from each Murad cigarette pack, and fifteen could redeem the cards.

Early basketball cards are so few that these are the best examples that we know of. The one argument comes from postcards with college players, but these are not considered legitimate trading cards.

It took until 1932 for basketball cards to resurface. C.A. Briggs Chocolate issued a 31 card set with different sports. Nobody knows the full number of basketball cards in the set. A completed set was awarded with baseball equipment.

Although the basketball players are less important with only four players, the set has the top athletes from everything from wrestling to dog sled racing. For perspective, the only baseball players on the set are Babe Ruth, Ty Cobb, and Carl Hubbell.

The 1933 Sports Kings consists of 48 cards. A major historical note is that women are on the set for their athletic prowess. The backs of the card have the name, sport, and biography. It is one of the best sets of the decade.

This is the most important set mentioned so far. It is the first official NBA set. Technically, every single card on this set is a rookie.

George Mikan’s RC anchors the set as one of the most valuable basketball cards in existence. Gem Mints go for over $200,000. There are five other Hall of Fame players on the 72 card set, and each card measures 2 1/16” x 2 ½”. The pictures are black and white, tinted, and with a red or blue background. The rare grey backgrounds are far more valuable. #37-72 are far scarcer, and George Mikan is at #69.

These cards hold some true basketball history. The BAA and NBL were about to merge, and there were still very small market teams like the Providence Steamrollers. Such teams from smaller cities were very common in multiple sports back then.

This was the era of no shot clock, and there is a line on the back of his card praising Sidney Hertzberg with, “He’s tops at holding ball in backcourt when such tactics are necessary.” Back then, the scores of professional basketball games would look similar to the scores of a football game. Teams would delay and wait for the perfect shot or get ahead and let the clock die.

Many of the cards simply explain plays to new fans, such as the “Screen Play” card.

Topps dipped its toe into the market in 1957. The initiation of the shot clock had revolutionized the game. Pleasing fans, the shot clock had dramatically increased scores. Teams began to move into bigger markets with the Rochester Royals going to Cincinnait and the Fort Wayne Pistons to Detroit.

Topps debut was an 80 card set nearly every card is a player’s rookie card. The set is praised for its mixture of portraits, full shots, and players captured in action. There are significant players such as Bill Russell, Bob Cousy, Bill Sharman, and Bob Pettit. 22 of the players on the set are in the Hall of Fame. The cards are rare, and condition is tough with horrible centering and grainy photos.

Topps would not return until 1970.

Another toe dipped into the market was Fleer in 1962. The set was printed in equal quantities because there were 66 cards. There was nothing short printed, high numbers were just as common, and there were no variations, except for Jerry West at #66 has typically seen some damage.

There are some serious rookies on this set. Oscar Robertson, Wilt Chamberlain, and Jerry West are printed twice. Cards numbered 1-44 are portraits, while numbers 45-66 are action shots. The portraits are considered true rookies by collectors.

Other Hall of Famers on the set include Bill Russell, Bob Cousy, and Elgin Baylor, with several others as well.

Fleer also immediately exited the basketball card business. Stability would not truly come to the hobby until the late 1980s with the rise of Michael Jordan.

Topps would produce basketball cards from the 1969-1970 season into the early 1980s. Basketball was growing, but it was a far third to baseball and football. This was the first decade in basketball’s history that cards were produced consistently. While there are players such as Julius Erving and Pete Mavarich, the 1970s lacked the stars of the 80s.

The Beginning of the Boom

The Celtics versus Lakers rivalry was tremendous for the NBA in the 1980s. One of the two teams was in the Finals nine times in the decade, they faced each other three times, and the Lakers won the best of three 2-1.

On the one side, the Lakers had the flashy, fancy, and exciting Magic Johnson. The Celtics had the blue collar Larry Bird. Both represented their cities well, and both were incredibly talented.

Basketball began to take off, and producers, notably Topps, were slow to follow through. 1982-1983 had no cards, and then Star produced cards that were found in hobby stores with team bags. Hoops, Fleer, Star, and Upper Deck entered the market as Topps left a void.

The biggest loss for Topps was Michael Jordan’s rookie card since Topps was not producing at the time. His true rookie is the Fleer 1986-1987. This card has become the most important, recognizable, and sought after card in basketball cards. Buyer beware as counterfeiting and tampering (especially with the sensitive borders) are extremely common.

Values have continued to soar for the popular card. Michael Jordan is the greatest basketball player of all time. Some debate, but many do not. Michael Jordan brought an excitement to the NBA that was unseen, and the hobby followed suit.

Topps soon came back with Topps Finest and its refractor inserts. The 1996-1997 Topps Chrome had the Bryant, Iverson, Marbury and Ray Allen cards.

Inserts, such as jerseys from Upper Deck, began to take over the market as collectors invested in higher priced cards. Collecting flourished as producers created super premium sets selling boxes priced at 100s of dollars.

LeBron James and into Today

Basketball cards, as well as sports cards in general, hit a wall in the late 90s. LeBron James has worked to take on the mantle of Michael Jordan in many ways. Like Mike, LeBron has led the growth of basketball cards for well over a decade despite the burst bubble. 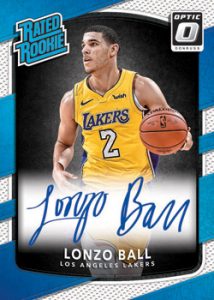 LeBron James, drafted in 2003 along with stars like Carmelo Anthony and Dwayne Wade, inspired Upper Deck to create the super premium Exquisite Basketball which had a price tag of $500 per pack. The set had a very low print run, and there were many rookies which often had autographs or jersey patches. Investors were eager for his rookie, but LeBron also opened the door for these popular super high end products.

Due to the bubble, Panini’s is the remaining licensed distributor. Many collectors exclusively bought Topps or Upper Deck, and this has been a change. However, Panini has done well to keep the attention of investors as partly inspired by the Exquisite Basketball set.

One interesting set is the Gold Standard which come with literal gold. Or, the Totally Certified with the Black and Green parallel version. Panini’s Flawless and Immaculate are high quality brands with thick stock and low serial numbered autographed cards.

Basketball cards have a unique history in following the professional sport. While basketball struggled to gain a hold for decades, there was the low key set every so often for over half a century.

Basketball has shown tremendous growth since the 1980s. In the 1982-1983 season, nobody even bothered to produce cards! The Lakers vs. Celtics, Michael Jordan, LeBron James, and now a huge crop of young stars has led the NBA into the limelight.

The television ratings, attendance, and the evaluations of franchises continue to soar as basketball has a future of taking on soccer as the world’s game.

The industry of basketball cards has always followed the popularity of the game. There is no reason for that to stop.