Earvin “Magic” Johnson grew up with nine siblings in Lansing, Michigan. Born in 1959, Magic soon developed a passion for basketball, and he turned heads early. The name Magic was coined by a reporter when Magic dropped 36 points, 16 rebounds, and 16 assists in a high school basketball game.

Magic went to Michigan State University where he immediately made an impact. He was a never-before-seen type of player because he stood at 6 feet 9 inches as a point guard.

In his sophomore year, he led his team to the NCAA Finals, where his team faced 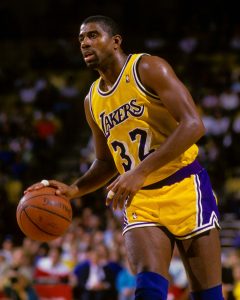 Indiana State led by Larry Bird. Michigan won, and the Bird-Johnson rivalry, one of the greatest in all of sports, began.

Magic was drafted by the Los Angeles Lakers in 1979 after only two years in college. He had a stellar first season, which culminated in a Lakers championship victory versus the Philadelphia, as well as the NBA Finals MVP presented to Magic. The Laker won again two years later against the 76ers, and Magic won his second Finals MVP. The 76ers won the third matchup in 1983.

The 1984 NBA Finals marked the beginning of the Magic/Lakers-Bird/Celtics rivalry of the 1980s. This rivalry spurred the NBA from a shaky standing into the soaring profits of the next three decades.

Magic announced that he had HIV in 1991. The virus caused great uncertainty across the globe at the time. People were terrified of the deadly potentials, and there was misinformation about HIV’s transmission. Many believed that only drug users and homosexuals could contract the disease.

Magic’s public admission created much needed awareness and information for the public. Magic spoke publicly, started a foundation, and wrote an educational guide around the condition.

Magic remained strong, and he played for the 1992 Olympic Team (The Dream Team). He played one more NBA season in 1996. He continued to excel through writing, sports management, and a variety of business holdings.

In addition to having multiple NBA Championships, Finals MVPs, regular season MVPs, and being an easy lock for the Hall of Fame, Magic was a public health ambassador during a time of fear and uncertainty for the world. His bravery and poise are remembered today, and some of his best trading cards help to capture his courage.

The 1979-1980 Topps came in a three for one design. At the time of its release, the design of three separable cards in one was not very popular, but it is a cherished set today. 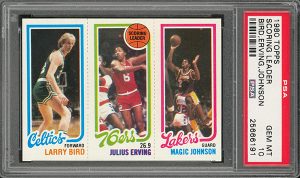 card because it is attached to Larry Bird’s rookie card with the Hall of Famer Julius Erving in the middle. It is excellent symbolism that the two players’ rookie cards are physically connected.

There were 176 cards in the set, and 264 different players were depicted overall. The cards are condition sensitive for the entire set because kids liked to separate the cards on opening. There are over seven thousand of Bird/Erving/Johnson card registered by PSA. 24 of those are in Gem Mint condition, and 600 are Mint.

The 1981 Topps basketball set is not overly expensive. It has the distinction of being the last major set for the NBA until the 1986 Fleer. It also has the rookie cards of Kevin McHale and Bill Laimbeer.

The 1986 Fleer is the most important basketball set. Basketball came into its own in the 90s, and this set has several rookie cards of 90s Hall of Famers. Basketball was not very competitive with baseball and football during the early days of the NBA, and cards frequently came in and out of production. This is the first national set since the 1981 Topps.

There are 132 cards of standard size. The fronts are easily recognized by the checkered 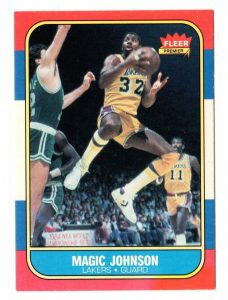 red, white, and blue border. Completing the set is a popular challenge because of the number of great players. This increases the importance of a card like Magic’s, even though it is far from his rookie season.

Fleer followed up the next year with a well received set. There are far fewer rookies, which is understandable, but there are many recognizable second year cards.

Magic Johnson’s card is affordable for the 1987 Fleer. There are many available on the secondary market. Gem Mint cards cost about $300, and the price drops to $30 for a PSA Mint 9.

Magic Johnson had a major impact on and off the court for basketball. He helped popularize the game at home and abroad, and he represented the members of the NBA as a strong individual. His cards are a good medium through which to represent his success.