Outside of trading cards, a legacy of Fleer is the introduction of Dubble Bubble in 1928. The gum could be blown into bubbles with great taste and the classic pink coloring. As a confectionary company, it was natural for the time period for Fleer began producing sports cards in 1923.

Another major legacy left by Fleer was their competition with Topps. This eventually led to a six year legal suit starting in 1975. Fleer won, and the company opened baseball cards to several other competitors in the 1980s.

A dismal legacy left by Fleer is their representation of the boom and bust of sports cards in the 1990s. The company went through a quick series of acquisitions. First, Fleer sold for $70 million in 1989, then $340 million in 1992, which quickly turned to $30 million in 1999 after a bankruptcy brought on by the lockouts and strikes of the major sports. 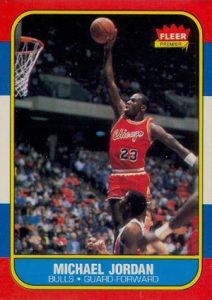 Upper Deck offered to buy the struggling Fleer for $25 million in 2004. Fleer rejected the offer as they believed that the market was turning around. They were wrong. Fleer was bought by Upper Deck in 2005 for $6 million. The last basketball cards with the Fleer brand were released in 2013.

However, a beautiful legacy left by Fleer are their basketball cards, particularly the cards from 1961 and 1986.

Topps produced one basketball set in 1957, and they did not start again until 1969. Outside of Kahn’s Wieners which produced locally distributed card focusing on the Cincinnati Royals, Fleer had the only major basketball set from 1957-1969. Along with the 1957 Topps and the 1948 Bowman, the 1961 Fleer is part of the Big Three of vintage basketball.

Fleer stepped in again when Topps ceased production of the less than popular NBA in 1982. When Fleer restarted production in 1986, they produced some wonderful rookies backlogged by a few NBA seasons without official cards.

The 1980s and 1990s were the most important decades in NBA history. Before then, basketball was a distant third in the United States to the NFL and MLB. With the Celtics-Lakers rivalry in the 80s and the high flying Michael Jordan Bulls in the 90s, the NBA took to new heights.

Fleer was there to capture the magic for a couple years when no other producer was around. Fleer has some of the best rookies and other cards in basketball history. This article will take you through Fleer’s significant contribution to basketball card history.

This set has some great cards, including the rookie cards of Jerry West, Wilt Chamberlain, and Oscar Robertson. There are several other rookie Hall of Famers such as Wayne Embry, Hal Greer, Richie Guerin, Bailey Howell, K.C. Jones, Sam Jones, Guy Rodgers, and Len Wilkens. Also throw in the non rookie cards of Bill Russell and Bob Cousy for good measure. Of the 66 standard sized cards in the set, 43 feature Hall of Fame players.

23 cards show action shots. Many players have a posed photograph and an action one. The cards were produced in equal quantities, so there are no short prints. The only rare card for condition quality is Jerry West’s action shot at #66 due to children’s rubber bands. 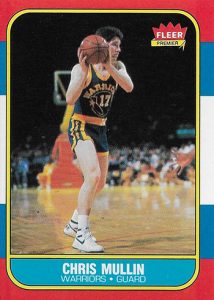 This is the most important modern basketball set because it contains the rookies of great players. Rookie cards include Michael Jordan, Charles Barkley, Clyde Drexler, Patrick Ewing, Karl Malone, Dominique Wilkins, and Hakeem Olajuwon. There were 132 cards in set which was issued in wax packs unlike the inconsistent packaging of basketball cards in the years prior. Completing the set is a focus of many collectors today.

The cards feature a multi colored border of red, white, and blue. The photographs are praised, but Michael Jordan’s photograph as he flies through the air is truly iconic.

Each pack contained a Photo sticker insert which is worth thousands of dollars today in Gem Mint condition. The most valuable Fleer stickers are from 1986-1989. There are no short prints in this set.

The 1987 Fleer is not nearly as important as its predecessor, but Fleer stood alone in the market and produced several important cards for Hall of Fame players. Kareem Abdul Jabbar, Charles Barkley, Larry Bird, Clyde Drexler, Julius Erving, Patrick Ewing, and Magic Johnson are featured on the set as well as others. Detlef Schrempf and Brad Daughtery are the notable rookies. Michael Jordan anchors the set, and his card is worth $2,000 in Gem Mint condition.

The rookie cards of John Stockton, Reggie Miller, Dennis Rodman, and Scottie Pippen anchor the set. The set approaches 1989 where cards begin to plummet, and this set is already inexpensive. In Gem Mint condition, the stickers are far more expensive than the cards. For example, the Michael Jordan card costs $500 while the sticker costs $8,000.

This marks a defining year in the decline of the price of Fleer basketball cards. Even a Michael Jordan card goes for less than $5 at a PSA 8. There was an ungraded complete set with two Jordans that was offered for $20 on eBay from a reputable seller.

The two notable cards from this set are the Michael Jordan and Vlade Divac rookie card. Both are cheap at $50 for a PSA 10. Perhaps the best part of the set is the Michael Jordan picture. He is on a breakaway, and the picture shows him slamming the ball home. Scottie Pippen is right behind him in the background.

The set was categorized by team name which was followed by alphabetical order for each player. There were 198 cards in the set.

At the time of the release, the Fleer brand had gained serious recognition in the hobby. This set was strongly anticipated by collectors. Price Club (the predecessor of Costco) sold out of the initial release by the pallet within hours.

Including this set, the next few Fleer sets are not worth much despite the enthusiasm at release. Furthermore, Fleer began to go through financial difficulties. The glory of Fleer truly lies in the ever important 1961 and 1986 sets.

This 300 card set has the rookie cards of Ray Allen, Kobe Bryant, and Allen Iverson. 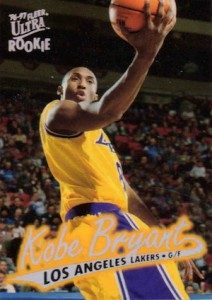 Depending on the parallel, they can reach a few hundred in Gem Mint condition. The Michael Jordan Thrill Seekers is worth a few thousand dollars in high grade.

This was the last set produced under the “Fleer” brand independently, though Fleer continued to produce as “Fleer Tradition” and “Fleer Platinum.” Many people referred to “Fleer Tradition” as simply “Fleer.” Upper Deck produced “Fleer” named sets in the 2000s.

The finish of the set was criticized as being more susceptible to damage. Fleer contended that the finish allowed autographs more easily. The finish is an interesting quality of this set to debate today.

Fleer released several sets this year including the base, Avant, Focus, Mystique, Patchwords, Platinum, and Showcase.

The best part of these sets are the rookies. LeBron James, Dwayne Wade, Carmelo Anthony, and Chris Bosh are the keys to these sets.

The 2013-2014 Fleer Retro Basketball was the last basketball set released by Upper Deck with the Fleer name. In each box there were 2 autographs, 90 cards, and 18 inserts of 4 types. The most sought after card today is the Giannis Antetokounmpo rookie card.

Today, Fleer is remembered for two great sets in 1961 and 1986, their challenge of Topps in the courts, and their representation of the 90s bubble where Fleer burned bright and quick in the early 90s.