Pete Rose is best remembered for surpassing Ty Cobb’s hit record with 4,256 career hits as well as several other records, but he is also recalled for a betting scandal in the late 1980s.

Rose was born in Cincinnati, Ohio in 1941. He started playing baseball as a young age, and he developed his switch hitting ability at eight years old. He spent three seasons in the minor leagues after signing with the Cincinnati Reds at 18.

He was soon recognized as an excellent hitter, and he joined the Reds. After winning the Rookie of the Year for the National League, Rose went on to lead the NL in 1968 and 1969 in hitting.

The Cincinnati Reds found their stride in 1970, and they became known as the “Big Red 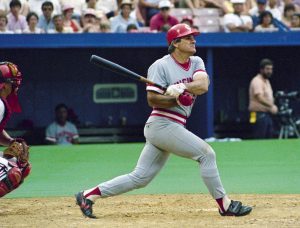 At 37 years old, Rose left for the Philadelphia Phillies, where he won a third World Series. After five years in Philadelphia and one in Montreal, Rose finished with the Reds for two final seasons. He retired at 45. He ended his career with a .303 batting average and the records for hits (4,256), games played (3,562), and at bats (14,053).

When Rose returned to the Reds, he was named player-manager. He continued to manage the Reds until 1989 after his retirement in 1986. His managerial record stands at 426-388.

Scandal struck in 1989 when Rose was accused of gambling on baseball. Rose and many associates were interviewed by the Commissioner of Major League Baseball. The Dowd Report alleged that Rose bet on 52 Reds games in 1987. The report held that Rose most likely never bet against his own team. Rose vehemently denied all allegations.

Eventually, as Rose’s case looked bleaker, the two sides came to an agreement. Rose voluntarily agreed to a permanent ban, while MLB would then make no formal inquiry. Rose appealed the ban with three different commissioners in 1992, 1998, and 2015, and he was rejected each time. Additionally, Rose was deemed ineligible for the Hall of Fame.

Rose finally admitted to betting on baseball games in 2004 in his autobiography My Prison Without Bars and on an ABC news interview. He insisted that he only ever bet on his team to win. The admission was an attempt to gain reinstatement because his window for Hall of Fame induction was closing, but the strategy failed.

However, Rose is considered by consensus to be one of the greatest players of all time. He was named to the MLB All-Century Team. Though his legacy his marred by the 1989 scandal, he remains fondly remembered, and his cards help to highlight the best playing days of his career.

Pete Rose is pictured under the title “1963 Rookie Stars” on the same card with Pedro Gonzalez of the Yankees, Ken McMullen of the Dodgers, and Al Weis of the White Sox. Their individual pictures feature just their heads in a circular frame with a red 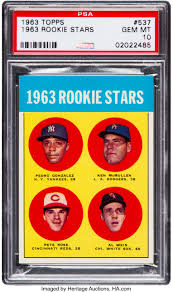 The set has condition issues because of the sensitive corners. On PSA’s registry, there is only one Gem Mint card, 30 Mint cards, and hundreds of cards at other grades, which totals to over 4,000 registered cards.

Pete Rose is featured in Reds uniform on the front of this card. The top shows “REDS” in bold lettering, and the bottom has his name and “2nd base” as his position. There is a little trophy in the corner that designates his Rookie of the Year status. There are 587 cards in the set, and Pete Rose is at #127. 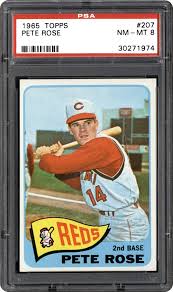 The most popular nickname for Pete Rose was “Charlie Hustle” which was inspired by his hustle in rounding the bases. This card was chosen because it shows Rose sprinting around the diamond.

There are over a dozen more quality Pete Rose cards that are valuable in Mint condition because of Rose’s extended career, and, except for the 1977 Topps, the ones described here are some of the best available.

Rose was undoubtedly one of the best players in MLB history. He may be remembered for his scandal by many, but other fans will fondly think of him, his records and awards, and his time with the Big Red Machine. His cards harken back to the glory days of his career before he fell into infamy, and they commemorate one of two members of the ultimate club: The 4,000 Hit Club.