Honus Wagner was born in Pennsylvania in 1874 by the name of John Peter Wagner. Seen as perhaps as the best all-around player in National League history, as well as the greatest shortstop ever, Wagner has the honor to be one of five men to be originally inducted into the Hall of Fame. His vote total was second behind Ty Cobb and tied with Babe Ruth.

Wagner was large for the early days of professional baseball at 6 feet tall and 200 pounds, but he was fast. He was a speedy baserunner and quick on defense. When he ended his career, he had the second most stolen bases in league history at the time.

Versatile is a great way to describe Wagner. He could play multiple positions if needed, steal bases, and he was an incredibly smart player at the plate. He could read a pitcher and catcher duo, and he would hit the ball with command. 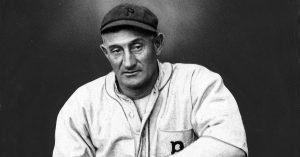 His 21 season career ended in 1917. Wagner played in the dead ball era, so he did not rack up large home run totals. He reached 10 home runs twice. Yet, he was a power hitter for the era. He still holds the record for NL triples with 252, and he led the league in slugging percentages on six occasions. His career batting average was .328 with 3,420 hits. He won the NL batting title eight times.

Wagner was often referred to as the greatest player of his era. Greats such as manager/player John McGraw and Sam Crawford are well cited as preferring Wagner over any other player. Even the fiercely competitive Ty Cobb said that Wagner was, “maybe the greatest star ever to take the diamond.”

In the trading card world, Honus Wagner has similar importance. His T206 is the most valuable card in the hobby. This article will go over the T206, as well as delving into a few of the most treasured cards in the world.

This is the most expensive and famous card in the entire hobby. The card is iconic, and it represents the industry.

Though it is exceedingly rare, the card is not the rarest available. Collectors today remain unsure as to why the rarity exists. Some believe it had to do with Wagner’s contract dispute with American Tobacco or distaste for a children’s collectible marketing tobacco. The short printed card is in heavy demand to complete pre war collections. 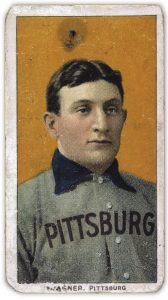 Regardless, the card was produced short. Estimates state that there are around 65 or 70 cards that have survived. There are 33 cards registered on PSA’s website, mostly lower grades. One card holds a PSA 8 rating. It is the highest rated card known.

In comparison with the rest of the set, which contains the likes of Cy Young and Ty Cobb, Honus Wagner cards are in short supply. For example, the number of Cy Young cards registered approaches 1000.

Wagner is posed with his Pittsburgh jersey against an orange background. “Wagner, Pittsburgh” is inscribed on the bottom. The backs typically come with the Sweet Caporal advertisement. A few cards have Piedmont on the backs.

We can only speculate as to what the sole PSA 8 would go for. PSA estimates the cost to be $7.5 million.

The PSA 8 Wagner is often referred to as the Gretzky Wagner because Wayne Gretzky was a previous owner. Interestingly enough, it was the first card ever graded by PSA. The current owner is Ken Kendrick who bought the card privately in 2007 for $2.8 million. The card is surrounded by rumor and legend, such as the belief that the card must have been trimmed.

There are several other famous Wagner cards like the Sheen Wagner (owned by Charlie Sheen), the Chesapeake Wagner, the New York Public Library Wagner (an ungraded card), and the Metropolitan Museum of Art Wagner. The Jumbo Wagner is the record breaking PSA 5 copy.

This is Wanger’s first official card. The set itself is important because it helped to standardize tobacco cards. The card and set are much rarer than the T206, it is older, and it has historical significance as the first year of the World Series. However, the set and Wagner’s card are not nearly as sought after.

Wagner is shown in a straightforward pose in a jacket and tie. The backs are either blank, a Breisch-Williams Company advertisement, or the back has the inscription, “One of one hundred and fifty prominent Baseball players.” 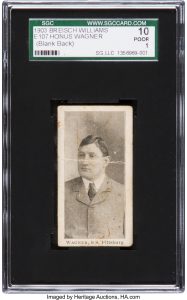 Wagner’s card is nearly impossible to find. For the entire 150 card set, there are 117 registered on PSA’s website. None of them are Wagner.

This famous set consists of 120 cards. Honus Wagner has two: batting and throwing. The cards measure 1 ½” x 2 ¾”. Several players have multiple cards on the set.

This card is a great example of a more accessible Honus Wagner. While it is still a rare card with 35 batting cards and 12 throwing cards registered, it is far more affordable than the mentioned cards.

In 2018, a PSA 1 sold for $1,128 of the batting version. The throwing version sold for $1,075 in 2017 at a PSA 1. An excellent set, well designed cards, and attractive surrounding cards like Joe Jackson’s rookie, this set offers good options on more affordable Honus Wagner’s.

This set commemorated the Pirates’ World Series victory in 1909 over the Detroit Tigers. Wagner sits against a blue background. Below him is written “Wagner, Pittsburg” with the set misspelling Pittsburgh.

Though every player is over $1,000 in higher grades, Wagner is the key to the set and the most expensive card.

Given the age, the surviving cards of the set are rare and mostly worn. There are 55 cards registered by PSA of Wagner. Most of them are lower grades, though six cards reach a PSA 5. The Population 1 PSA 6 card is the highest graded card, and it sold for $47,800 in 2015. Meanwhile, a PSA 1 sold for four thousand dollars in 2019.

Wagner is an important player of the dead ball era. He was great at bat, running the bases, and in the field. His T206 card has much to do with the short print and the quality of the set. Yet, Wagner’s displays on the field make him a worthy representation of the trading card hobby through his appearance on the T206.