Maurice Richard is best remembered for his crucial role in the Canadiens dynasty of the 1950s and 60s where the team won eight Stanley Cups. He is an important player in the early NHL, exampled by his being the first player to score 500 goals.

Born in 1921, he was the eldest of seven siblings. He grew up in a poor family that was devastated by the Great Depression. He truly took to hockey as a student to be a machinist. Richard quickly found a love for the game, and he joined several teams at once in order to play every day. He operated under fake names to pull off his multiple 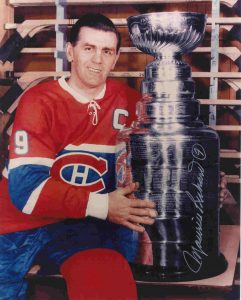 Richard signed with the Montreal Senior Canadiens in 1940, which was the farm team for the NHL Canadiens. His career seemed over before it began due to injuries. Interestingly, he was rejected by the Canadian military because of his reported fragility.

However, Richard persevered. In the 1943-1944 season, Richard formed the Punch Line with Elmer Lach and Toe Lake. It is considered a legendary forward line.

Richard went on to score 50 goals in the next season, the MVP Hart Trophy in 1947, earn 14 time NHL All-Star selections, and he was readily inducted into the Hall of Fame, as well as being named to the list of the 100 Greatest NHL players. Today, the Maurice Richard Trophy honors the NHL’s regular season goal scoring leader.

The ferocity of Richard lives on through stories. It was believed that nothing could stop him from scoring: neither sticks nor fists. He was a very aggressive player.

On March 13, 1955, Richard got into a fight with an opposing Boston player. Enraged, Richard, perhaps accidentally, struck a linesman. He had already been suspended earlier in the season, and the NHL felt that it had no choice but to suspend Richard for the remainder of the season and playoffs.

Montreal was infuriated. The next game is the shortest NHL game ever. It included tear gas, tomatoes, and significant riots. It is referred to as the Richard Riot. Many scholars cite the unity and outrage of the Richard Riot as a prelude to Quiet Revolution in Quebec, which is a highly significant period of social, economic, and cultural change in the Canadian province.

Richard is an important part of the history of the NHL. He was a member of a great dynasty, a truly great player, and his character exemplified the grit of ice hockey.

Richard lands in the middle of a difficult era of cards because his peak is during and soon after the end of World War II. He misses the coverage of O-Pee-Chee, and he was never covered by Topps. Luckily, his career is partially covered by Parkhurst, which offered good hockey cards in the 1950s This article will take you through a few of his best cards.

There are 105 cards in this set, and they measure 1 ¾” x 2 ½”. It is the beginning of the reintroduction of hockey cards. Richard is shown on the ice with his stick in hand. The set deals with general scarcity through demand as well as condition issues with poor 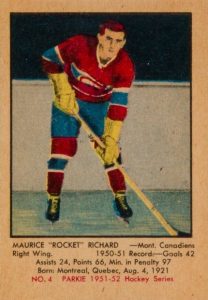 centering and weak stock. Richard’s card is no exception.

There are 100 cards in the 1953 Parkhurst, and they increased the measurements to 2 ½” x 3 ⅝”. Parkhurst improved the design and beauty of the cards for this years, so much so that many consider it one of the finest hockey sets.

There are 265 cards registered by PSA for Maurice Richard. Condition sensitivity improved with two Mint cards and 30 NM-MT. PSA 8’s have sold for between $2,000 and $3,000. PSA 5’s are very reasonable, and they can be bought for a few hundred. 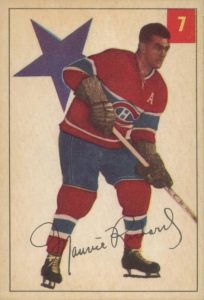 The size and number kept changing for Parkhurst sets, and the 1955 measures 2 ½” x 3 9/16” for this 79 card set. Richard continues to be a key to the Parkhurst sets. This happens to be the season of the abovementioned Richard Riot. Richard’s photo is captioned by the name, “Rocket Richard.” Rocket was a nickname that followed him into retirement.

Sports can often paint broader pictures on their respective time periods. Richard helped to represent a burgeoning game, and he was a medium through which public outrage could be expressed. Sports cards are historical documents that help to represent the player, the brands, the respective leagues, and the broader social issues of the time period.