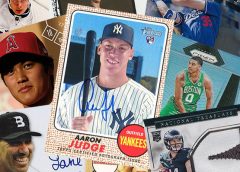 For as long as they have existed, baseball cards have been highly sought after by a wide variety of people. Though the hobby declined a bit throughout the latter parts of the 20th century, recent years have seen interest in trading cards—and specifically baseball cards—pick up pace dramatically. Stepping in to help facilitate this growing interest in baseball cards is a startup called Alt. For a few years now, Alt has been facilitating trades and sales of cards online, verifying that both sender and recipient are not being scammed.

More recently however, the world is seeing interest in investing go through the roof, mostly thanks to people being stuck at home during

the Covid-19 Pandemic. With folks looking to make money in their increased free time, we have seen massive interest in traditional equity markets, but we have also seen the growth of new markets, such as those based on blockchain technologies; such as NBA Hot Shot. Alt, and its CEO Leore Avidar, have decided to test new waters and are introducing card collectors to an entirely new way of investing in baseball cards. Much like Robinhood brough stock market investing to the everyday person, Alt is hoping that it can allow enthusiasts and collectors to own trading cards, even if they do not possess the physical card itself.

A New Type of Alternative Investing

Now that things like cryptocurrencies and NFTs have made their way into headlines every week, the world is now beginning to fully embrace forms of investing that, even a few years ago, might have seemed foreign. Pre-pandemic, the best ways for one to buy, sell, or trade football or baseball cards was either at a card show or online, at places like eBay or the many card-related forums that exist. Over the last year, card shows have more or less gone extinct and places like eBay remain riddled with fakes, scammers, and all sorts of other pitfalls.

Alt has stepped in to take away the hassle of traveling to a card show and the untrustworthiness of some eBay sellers by offering an all-in-one platform that allows users to buy, sell, and even store their cards in a light and temperature controlled room to avoid any wear and tear. Alt works to validate every transaction such that the buyer of a card can be certain that the item is authentic, and the seller will not have to worry about never being paid. In a sense, Alt has created the first stock exchange for trading cards, where one can buy and sell freely, often without ever having to mail or receive a physical card. What Alt is really doing is both increasing the transparency in the sports trading card realm and also ensuring greater liquidity. What we mean by this is that even though a given basketball card–say a Michael Jordan rookie–may have a discernable value, turning that card into cash is not always straightforward and even infrequently quick. First you have to find a seller, then you have to ensure that you are not being scammed, and so on. With Alt, not only are cards bought and sold with the click of a button, the platform verifies that all transactions are both authentic and secure.

Having just wrapped up a round of funding that exceeded $30 million, it is clear to see that interest in platforms like Alt is not going away in any hurry. Alternative investments are popping up at a frantic rate, and Alt is simply bringing about a new take on a timeless hobby. Trading cards have transcended time, and platforms like Alt will ensure that the hobby not only survives, but grows in the years to come.