Growing up in Van Meter, Iowa, Feller played baseball for his local school teams, and he was also a standout basketball player. As early as the age of 16, Feller was being 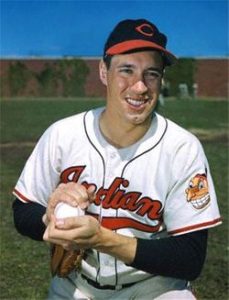 He signed with the Cleveland Indians in 1936, and in July of 1936, Feller debuted as a reliever on the 19th. On August 23 of the same year, he had his first start, where he struck out 15 players and recorded a win. He was 17 years old.

After finishing the season with the Indians with more standout performances, Feller was the most famous youth in America. He returned to Iowa for his senior year of high school, and he was met by the Governor of Iowa.

This may seem somewhat “heard of” today with the occasional teenagers in soccer, basketball, and many other sports, but at the time, Bob Feller was a phenomenon, totally unprecedented, and worthy of national news. In 1937, he was on the cover of Time magazine, and his high school graduation was nationally broadcast on the radio by NBC.

Feller continued to live up to his reputation over the next twenty years. He was probably the best pitcher of his era.

With regards to his legacy, Feller was widely respected by his peers. For example, Ted Williams called him the “fastest and best pitcher I ever saw during my career,” and Stan Musial called him the greatest pitcher of the era.

Another interesting tidbit about Bob Feller was that he was the first American professional athlete to enlist after the attack on Pearl Harbor. Although he was offered an exemption due to a dying father and he was offered peaceful marketing positions, Feller insisted on seeing combat, which he did. This only furthered the immense respect and fame that he garnered from the American people in general.

The Cleveland Indians retired his number 19, and they inducted him into their Hall of Fame. Feller was inducted into the Baseball Hall of Fame in 1962 with 93.75% of the vote on the first ballot. At the time of his induction, only three players had a higher percentage of the vote.

Feller played during a great era of baseball card collecting. This article will take you through some of the best.

The 1938 Goudey set has 48 cards that measure 2 ½” x 3”. It is referred to as the “Heads Up” set because the enlarged heads are superimposed on cartoon bodies. The set begins the numbering system at 241, as if it were a continuation of the 1933 Goudey.

Bob Feller is featured twice at #264 and #288. The cards have the same picture and layout on the front, but the #288 has extra graphics surrounding the picture of Feller. He is a key to the set, along with Joe DiMaggio, Jimmie Foxx, and Al Lopez.

These cards are decently well preserved. For reference, PSA has 153 copies of the #264 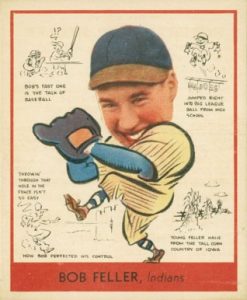 registered and 196 copies of the #288 registered. None of these cards are in Mint condition.

Bob Feller sits at card #5, and he is a key to the set. Yogi Berra, Warren Spahn, and Stan Musial are some of the major stars on this loaded set.

The number of cards can start to rise for different sets in the post-war era. The number of Feller cards from this set that are registered with PSA jumps to over 1,000.

The 1948 Leaf is an important early set, and it is well noted for its colorful design, especially in contrast with the Bowman of the same year. There are 98 cards in the set, and they measure 2 ⅜” x 2 ⅞”.

There are only 116 of these cards registered with PSA, and the card is not up for sale often. 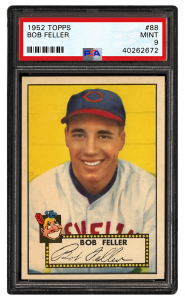 Feller was exiting his prime and nearly retired, but he remained an important part of this historically significant set. He sits at card #88.

Feller was a popular player, so there are about 1500 cards registered with PSA. While a Mint condition card can sell for $8,000, a budget of $1,000 might grab you a PSA 8, but it will for sure secure you any grade lower.

Bob Feller was more than a baseball player. He was an American icon. By starting a successful baseball career so young, volunteering early for the most important conflict of the century, and maintaining a consistent Hall of Fame career for decades, Bob Feller guaranteed himself a high status spot in baseball history with Americans.

He played during a great transition era of baseball cards as well. Collectors have a few oddball options in the pre-war era, and Feller was a key on some ultra-important early Leaf, Bowman, and Topps sets that help define baseball card standards. This article took you through a few of the best cards for Feller out there, and these cards do a great job of representing an American icon.